I leapt into the rabbit hole that is Archives yet again this year – building on my previous attendance in Perth (2018), Melbourne (2017) and Parramatta (2016)  – by attending the 2019 “Designing the Archive” conference in Adelaide (which was also the joint International Council of Archives conference). 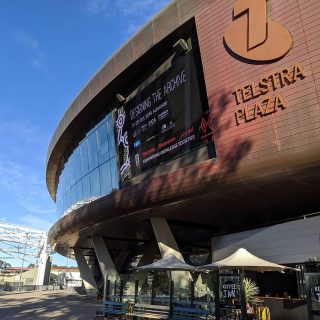 I never would have thought my first trip to the Adelaide Oval was for an Archives conference!

Each year that I attend an Australian Society of Archives conference, I come away with a different set of new knowledge, and new feelings and inspirations.  In Paramatta it was all about learning what Archives really was, in Melbourne we started to give back with our workshop around smaller archives and in Perth it was an extension of helping smaller archives, but also a lot of learning of some of the new things, including drawing a really bad cartoon of artificial intelligence in Archives.

This year in Adelaide there were two themes that stuck out for me on the two days I was there – on Day 1, it was about “international stuff”, and on Day 2 it was about “caring”.

“International stuff” means that we saw a lot from people all over the world, and a lot of what I saw was familiar.  There are a few groups that are further ahead in different parts of the world than some of the Archives in Australia, notably the Norwegians with their “turn a steam train into a bullet train – while at speed, and while also running out of tracks” analogy.  This is what all of the Archival clients we work with are trying to do, and we came up with a few good GIFs in Twitter about that…

Day Two was all about “care” – and the concept of cultures of caring rather than compliance.  It’s really important for those of us that are not day-to-day archivists to remember the content of the Archives can be confronting to those reading about themselves.  This really got me thinking (and I’ll admit there were a few tear-jerking stories shared on this day) about how important Archives are to our mission statement at Gaia Resources – their use really does make the world a better place.

And it is this “use” of the archives that had me thinking all the way through.  With some real gems in there, like: 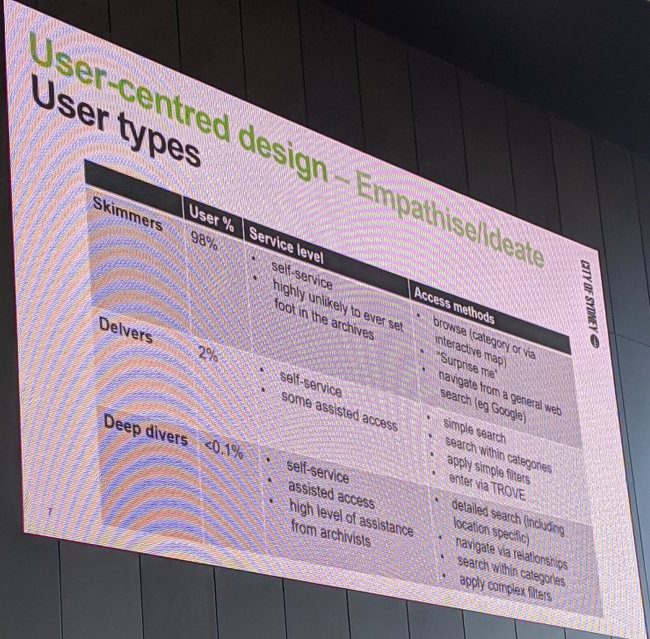 The City of Sydney found 98% of their audience are “skimmers” – yet we are often asked to implement interfaces to the Archives for the other <0.1% of the audience!

At the last minute, I was offered a spot to give back to the community again – thanks to Kathryn Dan from the Australian National University Archives, her, myself and Kari James from the Pacific Manuscripts Bureau gave a small workshop style session about the Access to Memory (AtoM) software.  This is a system that works pretty well for smaller archives, but as I always say, is no magic bullet!  We did finish with a call to action once again for people to communicate and share. We tried last year with the AtoM Users Australasia Google group and we really haven’t gotten too far with that group.  I think it’s time to re-think ways we can keep in touch (let me know via email or via  Facebook, Twitter or LinkedIn if you have an idea about this!).

The Archives conferences I’ve been to have been a constant source of learning and inspiration, and Adelaide was no different.  I got to connect with dozens of our clients (old and new), and with many people who have been there to help and support my own personal journey into archives along the way, and the journey that Gaia Resources has been undertaking.  So once again, I got to hit my three main objectives of a conference – learn something, find new people to work with, and to give back wherever we can.

After all that, I’m certainly looking forward to the Australian Society of Archivists 2020 conference in Brisbane – they’ve got big shoes to fill after this year!