Alex and I flew back from the inaugural Australian Citizen Science Association (ACSA) in Canberra on Sunday. I don’t think I’ve been to a better conference.  The number of highlights and things to cover from conference is hard to sum up in a single blog article, but you might also want to check out the tweets from the conference that used the hashtag #citscioz.

Gaia Resources were one of the gold sponsors for the conference, and we also pitched in to help run the event – Alex prepared and supported two posters (one on our new Citizen Science Hub, and another on the BDRS), while I presented a talk (embedded below, or available on Slideshare), ran the second workshop and helped run one of the Saturday workshops on technology usability.  It was a very busy conference for us, because in amongst that we also spoke to heaps of clients, collaborators, and a lot of new and energetic faces.

My talk on factors for success in citizen science

For me, the highlight of the first day was the success of workshop two, on data collection and management. My co-chairs (John la Salle and Luigi Ceccaroni) had given me free reign, so I took a risk with the format.  It totally paid off with the passion and enthusiasm that the delegates brought to the fore. The five talks I had selected to open the session were all well delivered and really gave the delegates the overview I was hoping for – why we need to collect data, the emergence of a project based data standard, two large projects (one is spatial extent and data, the other in time), and finally a reminder that people want to use (and cite) the data.  After a Question and Answer session, I took a deep breath and jumped. 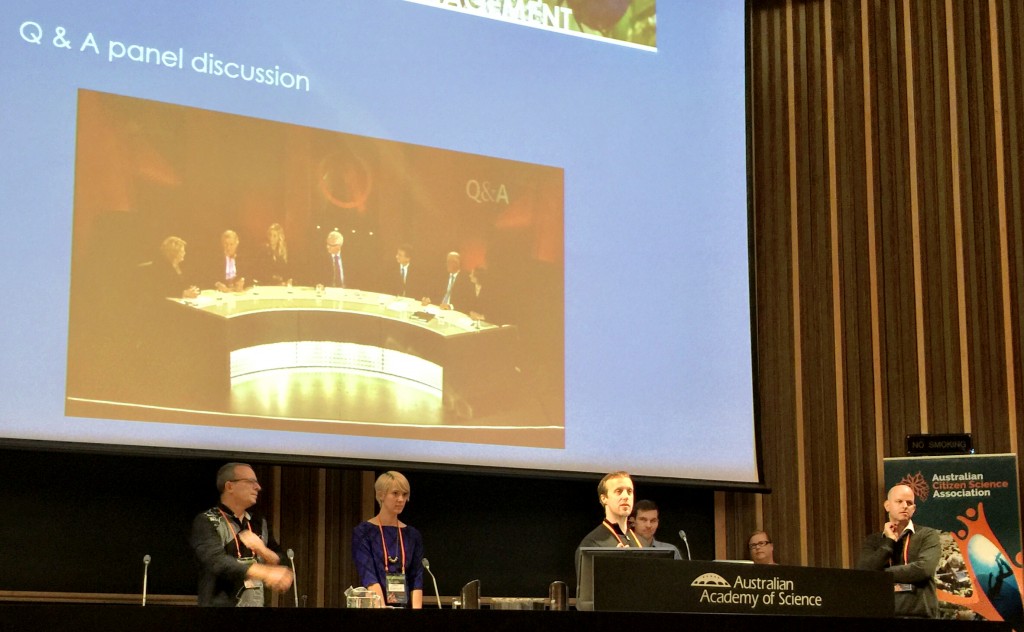 The Q&A Session in Workshop Two

In the second hour of the workshop my aim was to engage the audience to explain the challenges and opportunities that were to be found in data collection and management, using the DataOne data life cycle model to pick out the “Collect”, “Preserve” and “Integrate” steps. After a brief explanation, I asked a lecture theatre of 210 people to work with their neighbours to come up with three challenges and opportunities for each. After 15 minutes or so of roaming the room with my co-chairs, I brought up a document and started to type… and type… and type… I type pretty fast, but I was hard pressed to keep up with the shouts coming from the audience.

The full list of all the answers is here, but I’ve also taken that and Wordled it below… one for challenges and one for opportunities. 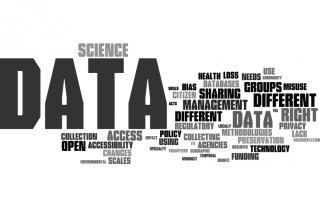 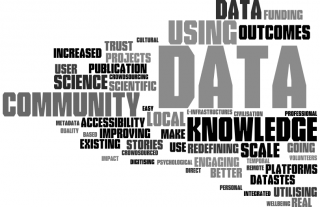 It’s pretty interesting just to look at these two Wordles, especially given the great big commonality of data (which was so often cited, Wordle included it twice in each) – but that’s worthy of something a bit more than just this overview.  I’m working on how to write this up into some sort of a report as well, so stay tuned for that.

I don’t think I’ve been happier to see a risk pay off and I’m working on both a report on this workshop, and a paper around these challenges and opportunities to submit to the nascent Journal of Citizen Science, something Alex and I found out more about after the Saturday sessions in an international meeting.  That meeting was another highlight, which I’ll get to in a second. Anyway, workshop two went better than I expected,  and the importance of BBQs in citizen science was finally recognised.

Day Two saw us being delegates once again, and there were quite a few highlights here – the vote to go ahead with the incorporation of the Australian Citizen Science Association (ACSA, pronounced “axe-ah” it seems), the election of the management committee and the understanding that ACSA has funding ready to start working on initiatives was a great start to the day. It got better as we heard from various speakers around their projects and other areas – there was much inspiration to be found throughout the day (helped by the doughnut balls at afternoon tea).

The final day I attended all four of the workshops. Although they were a bit ragged, they had plenty of enthusiasm. I helped Paul Flemons run the technology usability workshop by firstly giving a talk about the software engineering process (showing the difference between the waterfall and agile methodologies), with a focus on what you need to do as clients (not “users”).  Then Paul had a prepared exercise ready to go, where delegates broke up into groups, chose a use case, and prepared a list of requirements, designed the workflow for their use case, and even got to sketching out a rough design for the app (thanks to a handy whiteboard!) 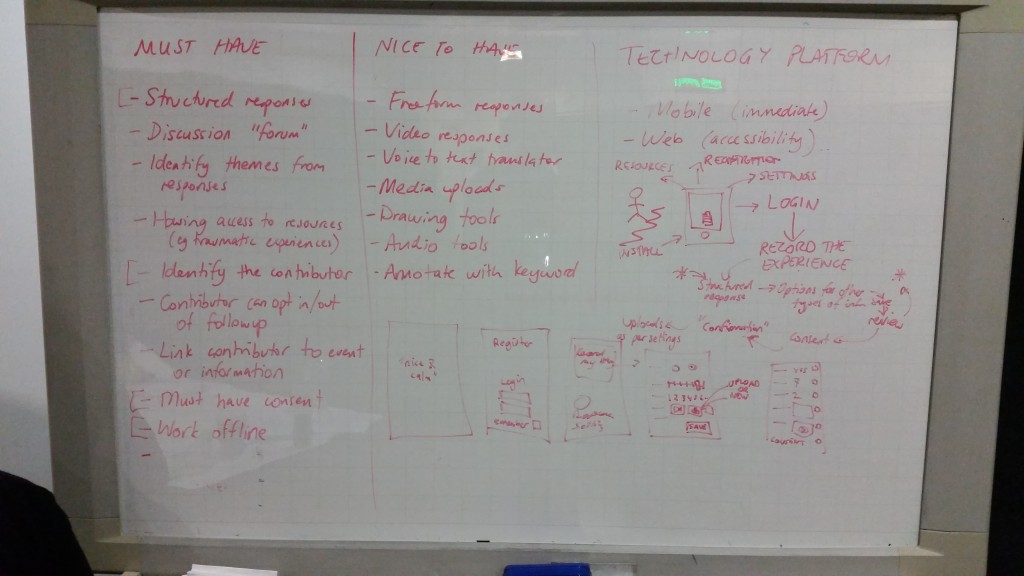 Our whiteboard (seriously, I think I have an addiction to whiteboards)

This was a new experience for many of the people in the group I was with, but they went along with the process, and at the end all four groups came back to present their elevator pitch (and suddenly I found myself being an impromptu mime in an elevator). This was quite fun, and a good way to end this session.  You now also have the origins of the BBQ, doughnuts, and elevator hashtags you will have seen in the Twitter feed…

After these four workshops, the new ACSA management committee had invited the international delegates and a few of us with experience in international projects (Paul Flemons as the Oceania representative of TDWG, and Alex and I for our past experiences with TDWG and OGC) to discuss potential collaboration,  the new Journal of Citizen Science, and interoperability and collaboration generally between ACSA, and their European and American counterpart organisations. It was a pretty productive discussion, in that we might have some more Australians on the editorial board, plans for an interoperability working group, and a few other initiatives that the new ACSA management committee will be working on.

It’s pretty hard to sum up the conference in a blog post as to all the things we learned… so in the end I didn’t try.  I think I can speak for Alex by saying that the conference was one of the best experiences we’ve had and it was exhausting.  We had some time on Sunday to decompress and write out our thoughts before coming home.  I think we wrote out about three pages of bullet points to work with, and I think we’re going to be working on this for a while to come… and yet, I can’t wait for the next one.