Over the last two days, we’ve headed down to the Birds Australia (WA) offices in Bold Park, and run some GPS training for the volunteers who are participating in the Carnaby Cockatoo Nesting Survey.  It’s a volunteer project for us, and it seemed to go quite well. If you want to know more about the Carnaby’s Cockatoo, check out Birds Australia’s main page on them here. 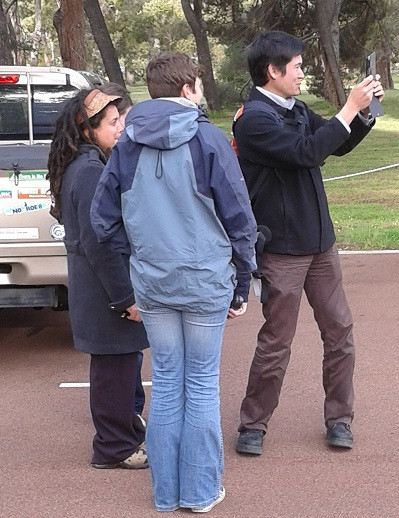 When AJ, Elizabeth and I arrived on Tuesday we found that the Birds Australia GPS units consisted offour units, a Magellan 2000XL, and three Magellan GPS300 units.  All of them are seriously outdated, but more on that in a moment.  We fired the units up on the first day, and could only get locks on a couple of the 300 units.  We wandered around outside for a while, showing the volunteers the way to read them, how to watch out for the accuracy values, and how to do some simple tasks like mark a waypoint (namely their car) and then find it again.

On Wednesday, AJ, Charlotte and I arrived and replaced all the batteries in the units, and then put them outside for a while in the open to get a lock on the satellites.  In one case, one of the 300 units took over 30 minutes to acquire a lock from the satellites.  It was a real reminder of how far we’ve come, and how much better the technology is these days.  However, the units did perform admirably – although it is disconcerting to have the unit think it was in the 1980s when I reset it and had to reinitialise it!

I was pretty mortified that these units were still being used and it’s all that Birds Australia have to offer their volunteers, so I went ahead and ordered five Garmin eTrex10 units to donate to them.  While we are a Trimble reseller, the Birds Australia co-ordinators, and a few volunteers, have these Garmin units already and are familiar with them.  So we thought it best to stick to the products they know.  Once the units arrive, we’ll get them across to the Birds Australia team so that they can use these units and have a bit more productivity.

Hopefully the training we did will be enough to help the volunteers get out and survey their area to find out some more nests for this iconic and threatened species. Our Citizen Science Portal for Birds Australia (supported by the Atlas of Living Australia) is also running here, and you can sign up and record your sightings of Carnabys Cockatoos in this site right now – along with the 1,374 other people who are doing so.  So far that site has over 5,108 records in it, from all across the South-West of Western Australia, and is becoming a really useful and interesting tool for the Carnabys team.

Posted in Blog
« What could Remote Sensing data do for you?
2011 Night Stalk »