Gaia Resources was proud to be involved last week with the Perth Hub of the virtual FOSS4G SoTM Oceania 2020 conference.

That’s a mouthful of an acronym or two there, so while I can explain it all – FOSS4G is “Free and Open Source Software For Geospatial” and SoTM is “State of The Map” – the best way to summarise this is to say that it is the conference for the “open source spatial community”.

On Friday, the virtual event rolled out across hubs in the Pacific, New Zealand and Australia, starting with a series of broadcast keynotes across a Zoom conference.  The keynotes were also live streamed on Youtube and you can still watch the live stream via Youtube (also embedded below).

I wasn’t sure what to expect from the livestream keynotes, so I went in with no expectations and found that they were really enjoyable and really excellent quality (even with Zoom).  Tom MacWright talked about the ethics of geospatial and open source, Grayson Cook talked about how there is art in satellite data, Lesley Arnold inspired us about how the open spatial community came together after the fires earlier in 2020, Nathan Woodrow told us that it’s OK to have hobbies and be in the open source game and Litea Biukoto explained about how disaster risk reduction was happening in the Pacific Region.

My favourite was Markus Mannheim, though – who is an ABC data journalist, and you can see his articles on the ABC site here. Markus talked about how it’s important to not lose the message when presenting spatial data – and his “three second rule” that you have to be able to understand a visualisation in three seconds, or it needs reworking.  It seems like “the good old days” of cartographic science (and art) still has something to offer to the modern era!

In Perth, we switched then to a local conference flavour.  We’ve been extraordinarily fortunate to have lived in an isolated bubble in Western Australia, so we have much fewer restrictions on what we can do than other places in the world.  With a really solid understanding of what we were allowed to do under health guidelines, our Perth organising committee (which I was part of) set out to make the most of what we could safely do.

In Perth, we ran a schedule of lightning talks – 13 talks of 5 minute length – straight after our morning tea which ran after the livestream.  The whole idea was to “energise” the audience and to get them going before lunch, so we had a whole range of presentations on a whole range of topics – and these were guided by the open community vote we had held, as we had too many topics to choose from in the time we had!

Alex from our team presented as part of that on our Dynamic Field Guide challenge, showing the audience what you can do with open source mapping components, as well as open data from the Atlas of Living Australia.  The amount of testing that Alex and the team had done meant that the live demo didn’t even raise the heart rates for those of our team that were attending! 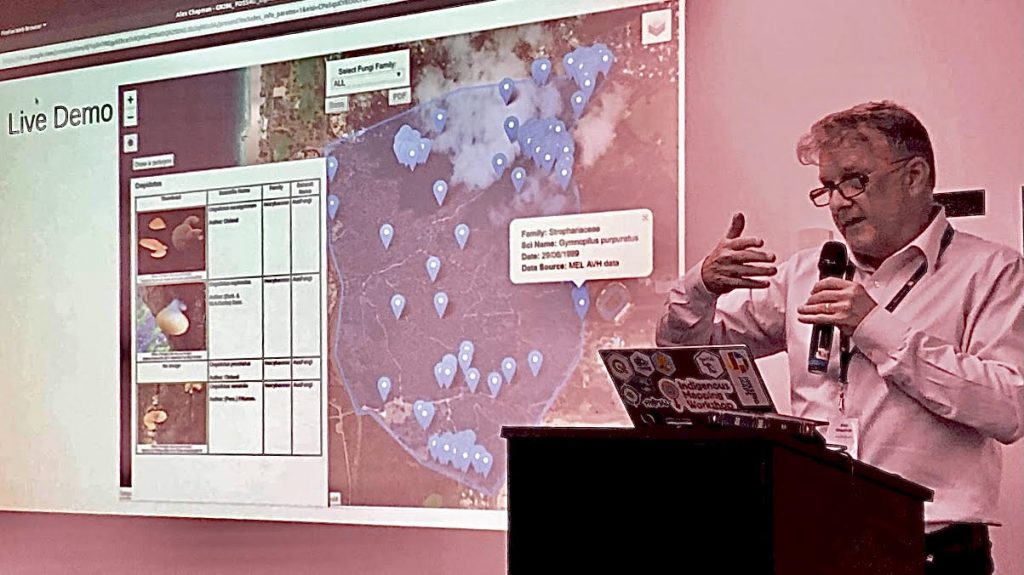 There were a lot of good presentations in that session, and I think that it got a lot of people interested in how varied and interesting our little Perth open spatial community is – people covered topics including the environment, COVID-19, hydrographic surveying, data, research approaches and all sorts of topics.

After lunch, we split into two streams for the longer 15 minute community presentations, which were again selected based on the community vote.  This was where I ended up in front of an audience again myself, giving a talk titled “How Open Source Created a Company”.  This was a bit of a fun talk for me to write, including a little trip back down memory lane for me, and to really see why open source is important enough for our company to sponsor the Perth hub.  It was also great to talk about our QGIS training courses and free resources and during the course of the day to talk to a bunch of people about ways in which that could help them, or join in with other initiatives. 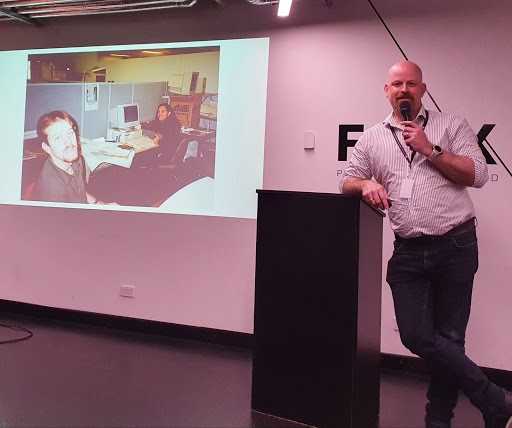 Again, the talks in this stream were really varied, covering data, historical maps, the United Nations, open data, open source software, indoor mapping, satellite imagery, and a couple of very, very popular presentations around the use of QField.  I was particularly impressed to see how far this tool has come, and a lot of the discussions in the later sessions seemed to follow on from this.

We rounded off the day with a keynote from Rod Nowrojee, about open data and the responsibility that it brings.  I have had the pleasure of knowing Rod for a long time (as the picture above indicates), and it was great to hear him recap on a range of things that he’s found in his varied career as a public servant in the spatial area.  I know a lot of people appreciated his talk and the insights he gave, as not only was he swamped at the drinks afterwards, but I had multiple conversations around it as well with people. 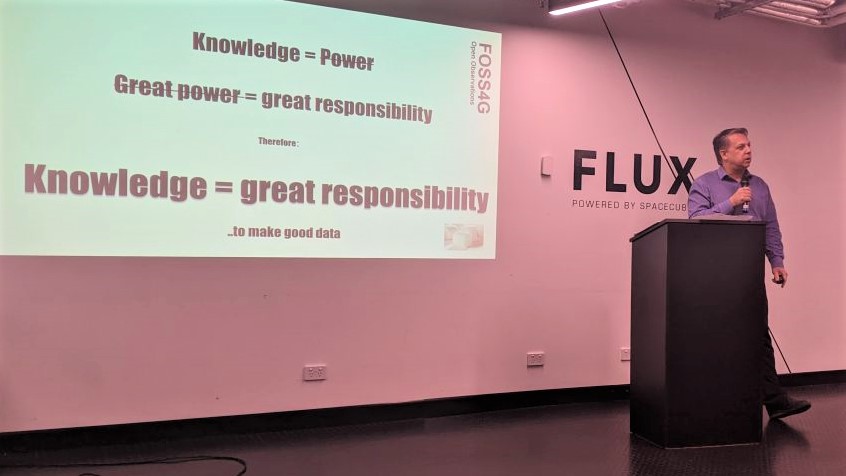 Drinks after the keynote were great – we had a lot of positive vibes and energy around with people really wanting to see some more open spatial events – there were many discussions during the day about getting the niches of our community, like GeoGeeks, SSSI and other “mini-communities” together and see what we can do in the future.  The sponsorship that we had for the conference from Landgate, FLUX, Hydrobiology, Curtin University and ourselves at Gaia Resources certainly gives us options for the future, too.

The local conference was organised by local volunteers, supported by their own employers (or themselves!) – John Bryant, Grant Boxer, John Duncan, Nimalike Fernando, Ivana Ivanova, Keith Moss and myself.  Special mention also needs to be made of Abi Harikumar, a student who volunteered to help us wrangle things on the day – and he went above and beyond to do just that.  As the drinks wound down, we were all a little in awe of what we managed to pull off across the course of the day, but I think the best way to sum it up from my own perspective was just damn proud.

As I said in my talk, it’s really important that we pitch in and support the open source communities that we work with, as much as we can, and in the ways that best suit our capabilities and position.  So supporting this conference was a no brainer – after all, open source and open data is at the root of Gaia Resources, and unless you look after the roots of something, it doesn’t fare particularly well!

So, as I sit here the day after the conference, writing this with sore feet from racing around all day, and a brain still foggy from a few weeks of lack of sleep, I’m also heading out on a couple of weeks of leave with a real sense of pride to be part of this community, and I can’t wait to see what we can collectively do next.