As this is a fairly long article, i’ll summarise by stating that for about 100 bucks, you can put together one half of a 5km wireless network link in an urban environment that in my case achieved 54Mbit at 15% packet loss and 12ms latency. Read on for the details…

I’m sure most people reading this article have at one stage or another connected to a wireless network of some kind. I’m also sure that most people have at one stage or another been frustrated by wireless dropouts. There have been a few wireless networks that I’ve worked with that have been absolutely rock solid, however, this I’ve found to be the exception, rather than the norm. Yet, despite these fairly common issues with WiFi, the wireless market is now flourishing with almost every modern phone, tablet, computer and now even home appliances such as TVs boasting wireless connectivity options. So why is this the case?

Up until recently, many people been wary of wireless networks due to their dubious reliability and limited range. Sure, every now and then you read an article online about someone who’s achieved a billion mile range using a home made cantenna or modified Galaxy dish, but when you read into the detail, it’s always within a carefully controlled environment with perfect line of sight, tall masts and high powered transmitters. Well the reason these people manage to achieve these kinds of results is exactly that. Wireless networks are all about the right equipment and network topology for the situation. In the past I have been involved with a variety of interesting wireless deployments such as 802.11a/b/n networks deployed into the bush to provide communications between sites, vehicles and mobile devices. In the industry I was working in at the time, however, we were lucky enough to have the resources to purchase specialist equipment that made the job of putting together a robust network fairly straightforward; in a domestic or small business environment, this kind of equipment has been cost prohibitive and complicated to setup.

Over the years experimenting with wireless I have had great hopes and much disappointment when the equipment doesn’t do what’s promised on the box. This week I started experimenting with long range wireless communications. I’ve been planning on trying out some long range experimentation for many years now, but it was really my rediscovery of the WAFreeNet project that again peaked my interest. The last time I looked at this project would have been late last century when I was living in an apartment and had no chance of mounting any sort of antenna or mast on our premises, but in the years since, I’m now in a position that I have control of my own roof (even if it is still owned by the bank). WAFreeNet is a network of networks based mostly in the Perth metropolitan area, however it does have links via virtual private network (VPN) to Kalgoorlie and even Adelaide. It is kind of like the internet in the early days, however it’s mostly based on wireless networking, rather than hard lines. You can see what their network topology looks like here.

So, the challenge for me was to see what it would take to link into WAFreeNet, and it turns out, it’s easier than I thought.

The first step I took was to have a look at the network topology for the WAFreeNet to get an idea of the bearings I would need to line up for a point to point connection to my nearest WAFreeNet nodes. There are several nodes around my house, but due to the landscape, many are not within line of sight. I used a few tools recommended on the WAFreeNet site here to help me out:

In the line of sight (LoS) graph above, my house is the central point and I have graphed the line of sight to two nearby WAFreeNet Access points. You can see here that i have a nearly perfect shot to the access point on the left, and if I can put my antenna high enough, I will have a clear shot to the one on the right also. (Although the one on the right is a 5.8GHz access point, and i’ve only been using 2.4GHz gear in my testing).

The next step involved doing an RF survey from the roof of my house. To do this, I used a USB directional wireless adapter that I’ve used in previous experiments and some handy software called NetStumbler which allows you to scan for wireless signals and record the signal strengths, channels and access point names. Interestingly, I was quite surprised to find a whopping 65 wireless access points visible from my roof. I was also quite pleased to see that all but two of these access points had at least basic security enabled on them (although it is quite easy to crack both WEP and WPA1 networks). The most valuable find of this part of the survey was, however, that I had managed to locate one of the WAFreeNet nodes. It turns out that the node that i’d seen from my rooftop was in fact a little 5km line of sight from my house (in fact, it was the node on the left of the LoS graph above which has the scale in miles).

Finally, I was armed with enough information to try to setup a prototype for trying out a real world long range wireless shot. The hardware that I chose to use is some pretty cheap off the shelf hardware. In total, at today’s market prices, you’d expect to pay around 100 dollars for the wireless router, antenna and cabling. The most important attributes when selecting hardware for this kind of network link are:

Of course, all these aspects need to take into account federal regulations for wireless communication, local council regulations for antenna masts, and must be legal. In the end, I went with a really cheap TP-Link Wireless Router, an SMA extension cable, a TP-Link Flat Plane Direction Antenna, and a short length of wooden dowel for my mast.

Step one was to setup the wireless router on my LAN and configure client access point mode. I figured that it would be easiest to align the antenna if I was to take a laptop up onto the roof with me so that I could log into the wireless access point and observe the signal strength whilst making adjustments, rather than running back and forth.

Once all the configuration parameters where setup, the next step was to get up onto the roof, route the coaxial cable for the antenna and mount the antenna on the roof. Because I was doing this quick and dirty, a short length of dowel was to provide my mast, simply bolted to a section of pergola. Hopefully this would provide enough height to get over the neighbours house. 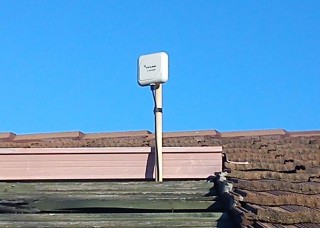 The procedure for aligning the antenna was pretty straightforward, simply a case of turning the antenna on the mast, and observing the difference in signal strength on the web console. Once I’d aligned the best signal I could, it was back down to ground level to do some testing during which I found that whilst I had a good strength connection, it was a little intermittent, with around 15% packet loss. What was very surprising however, was the low latency of the connection. Over the 5km wireless link, I was achieving a network latency average of around 12ms. That compares to an internet latency from home to work (we are on the same ISP, so it’s not going across the world to get to work) of 22ms. True, the packet loss statistic is less than desireable, however, in practical use, the link seemed quite reasonable for browsing WAFreeNet services and sites, and I’m pretty sure there is a correlation between the dodginess of my roof mounting and the packet loss statistic. I suspect if I was to reimplement the antenna mast, perhaps by piggy backing it onto my TV antenna mast (which is allowed to be 4 metres high in my suburb) I would be able to achieve a much more robust connection.

So what can I conclude from this experiment in wireless geekery?

So, what are your thoughts on how long range wireless technology applies to you? Let me know in the comments below!