On Friday afternoon, AJ, Benny, Aaron, Timo and myself went for a wander around Lake Monger so that I could show them how I undertake my own bird survey work.  I’m not sure I’m the best person to be teaching this… but I’m very keen to make sure that our applications work for a wide range of surveys, including my quasi-professional methodology.

The aim of todays testing was not so much to thrash our Atlas of Living Australia BDRS citizen science application as it was to give the guys a feel for how I undertake birdwatching, and what they need to do in the software to make my birding life a lot simpler.  I carted a backpack out with me with a whole bunch of gear in it… just like I used to before we started developing software to support field apps.  So my field kit for a birding survey contained binos, a couple of field guides, my  camera and a notebook and pencil. This is what I now think of as my “old skool” kit. 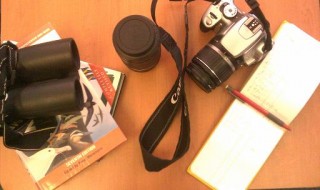 So off we went, walking along Lake Monger in the heat of the afternoon (carefully considered timing by me) to see what its like. My aims of this session were pretty simple, to give the guys an understanding of what I do in the field, but then to look at these points:

The guys have a bunch of feedback from the session that they are taking forward into our development work, and here’s some of their thoughts on the hour or so we spent doing this:

One of the best feedback points I got from the guys was “I guess we want to allow less trained people to approach the level of efficiency an experienced surveyor would have.”  That’s one of the key things that citizen science software should aspire to, and I like it as a governing statement to keep us honest in the coming months.

We talked through a lot of ways to incorporate this feedback, including specifics of web forms, mobile forms and the like.  And then we got a bit “out of the box” with a range of really interesting ideas – like using GPS enabled cameras to just record everything, and ID it later, or even using videos and tying frames back to GPS tracks (such as the track AJ recorded here using Motion-X on an iPhone).  By then we got a bit excited and were talking about GPS enabled ski goggles, helmet cameras, and all sorts of other goodies.  But it was a very interesting exploration of what might be on the horizon for our software.

I’ll be loading up the manual records I took in my notebook into the BDRS software we run for our own corporate data in the coming week – more testing! We did record a number of species, including the Purple swamphen (Porphyrio porphyrio) like the one in the photograph below (photo credit: me).

Next week we’re going to to some testing on mobile devices using the citizen science mobile version recording form.  Today’s session is probably long overdue, but it’s a good starting point.  I’ll post more updates on our testing in the coming weeks.

For me, well, I really enjoyed getting back outside and actually doing some birdwatching. I’d forgotten how much I enjoy it – even if one of my team was trying to catch me out by whistling behind me while I was listening out for calls.

Posted in Blog
« Do you know what biosecurity means?
AQWA Trip »