I have just returned from attending the 3rd International Conference on Marine Mammal Protected Areas (ICMMPA 3) in Adelaide. The conference theme was ‘Important Marine Mammal Areas – A Sense of Place, A Question of Size’.  You can see the conference handbook here.

A primary goal of the conference was to give attention to developing or refining criteria for the identification of globally important marine mammal areas (IMMA’s) and to address the challenges and strategies of managing very large and very small marine mammal protected areas.

It was the last which was the primary impetus for attending as Coastal Walkabout collaborator Professor Lars Bedj3r from Murdoch Universities Cetacean Research Institute was presenting the latest analyses of citizen science engagement and experience (a paper which Piers is a co-author on). 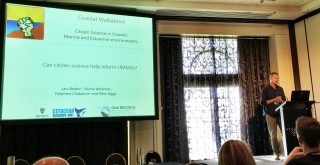 The case study ‘Is Citizen Science effective in informing candidate IMMA’s?’ compared 6 months of dolphin observations in the Swan-Canning River Park (SCRP) from both traditional (TS) and citizen science (CS) sources. The CS data was sourced from the Dolphin Watch initiative while the TS data came from a small team of researchers at Murdoch Uni.

Initial results from the case study suggest that:

The authors concluded that CS can make scientific, conservation and educational contributions to research in partnership with specialist scientists.

There were also a number of existing users of the Coastal Walkabout app (get it on iTunes, Google Play) in attendance and a good deal of interest from attendees in the application of smartphone apps to enhance their citizen science initiatives around the country and extending into the Pacific.