Earlier this year, we started working on the Marine Parks iOS app for the Department of Parks and Wildlife.  This mobile app is one of a few that we’ve worked on for the Department, including the Trails WA and Camping Mate apps previously.

The Marine Parks app allows you to search for marine parks and look at what activities are allowed in those areas (including fishing rules and bag limits).  This mapping functionality also includes interesting visitor sites and attractions, as well as details of some of the wildlife that is found in these marine parks. 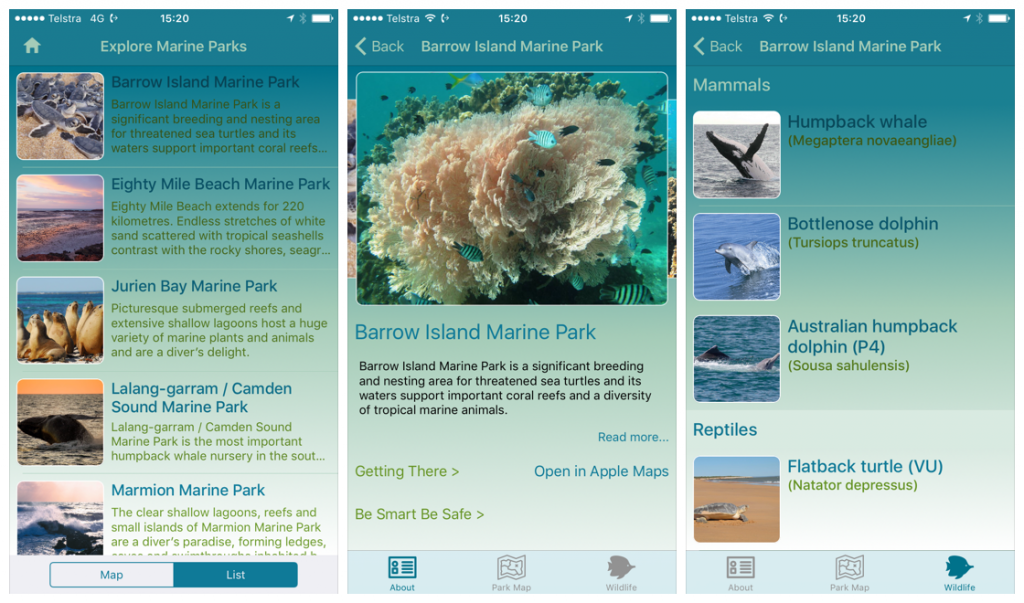 The app itself is a bit of a beast at 370MB, but this is to allow for the offline use of the app.  Western Australia’s 13 marine parks are scattered around the State and some – such as the Rowley Shoals – are well outside of mobile phone range (and hence, a data connection for a live map).  However, the desire was that people using the app could continue to do so outside of a data connection, so the app contains enough mapping data to allow you to navigate when offline in these remote areas.

This offline maps feature presented us with a challenge due to the need to zoom into quite a lot of detail, but also to keep the application data size relatively small.  Essentially, the more zoom levels that you allow within a map, the larger number of map tiles required – and the larger the app becomes.  So there is a tradeoff between the application size becoming “too large” but at the same time the maps must have enough content to be useful.  Since there were also many small Marine Parks that required an high level of detail for a user to determine their zone location, the best solution was to compress all the map tile images and package them into single zip files.  The result was relatively small application size with a generous number of zoom levels. 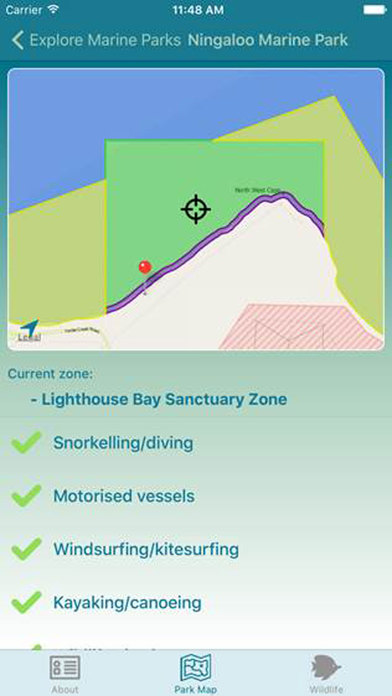 An example of the mapping and spatial intersection of your location with the marine zones, indicating the activities you can do in those areas

As with all of our development for the Department, we work very closely with their own developers.  In the case of our mobile apps, we create the app and provide the source code to the Departmental staff so that they can then upload it to the App store and manage it from there.  This arrangement also means that Departmental staff can build on the apps we provide to them in the future.

We have done some preliminary planning with the Department about an Android version of the app in the future, but for now, you can download the app from the iTunes store via the link here, or scan the QR code below with your iPhone.

If you have any queries about the app, or how we can help you with your own mobile app development, then feel free to contact me, or start a chat with us via Facebook, Twitter or LinkedIn.