Morgan and I went to the 6th National NRM conference in Coffs Harbour this week.  It was a bit of an epic trip to get there for the few days we were there – we basically chased the storms south and managed to miss most of them – but we did see a fair bit of the aftermath along the way!

We put in an abstract, but this was massively over-subscribed – there were over 150 abstracts submitted so it was very competitive as to who would speak.  The end result for us was that the abstract that Gaye Mackenzie (Rangelands NRM) and I put in was accepted as a poster presentation.  I chose to use their electronic format and we assumed that we’d get time to talk about it to people in the breaks – but when there are 10 posters on your setup, you can’t really stand there and talk about it as there are 9 other people doing the same!

However, Morgan had a brainwave, and decided to do a quick video of me talking to the poster, and we embed that below.  The quality isn’t great because of the lack of a proper mike, but we got some good tips (thanks Gerry) about how to do it much better in the future.

The “Knowledge Management in the Rangelands” poster, as explained by Piers

The conference itself had a few really great ideas in how it was run.  The best was a session called “Engaging Conversations” which took the people who put in an abstract but didn’t get a slot, grouped them into themes and had them give two minute spiels at their table.  Then those on the table had a discussion, and then wrote down the main things you learned, which I assume is to be sent out.  After 20 minutes, you switch to another table and start again.  While the execution of this was pretty ordinary (10 tables of 10 in one room make hearing anything very difficult), the idea is great and it is one that should be taken on board at future conferences – it is true targeted networking and learning, and was massively valuable (although I ended up leaving for a phone call and because I couldn’t deal with the noise levels, couldn’t face going back in).

As usual, the event was covered in a range of ways, including Twitter.  With Richard McLellan (NACC) there, you can expect a high volume of tweets being published!  But there were a wide range of different people tweeting, and I think Richard has converted a few more people into doing more of this from his own talk about using Twitter.  But if you do a search on #NRMConf2016 you can see all of the tweets that were made and see some of what people thought were the highlights.

From my point of view, there were two plenary highlights – Richard Heath and Darryl Low Chow.  Richard gave a talk that totally made me both get mugged down memory lane and set me thinking about future trends.  He had one slide about the evolution of technologies in this space that will probably end up being a blog post all of it’s own in the future.  On day two, Darryl had us gasping, laughing, thinking and learning about planning and the processes involved.  I really enjoyed this talk that set about not just educating us but giving us enough to make our own judgements as well – something that made me seriously envious of Darryl’s students. 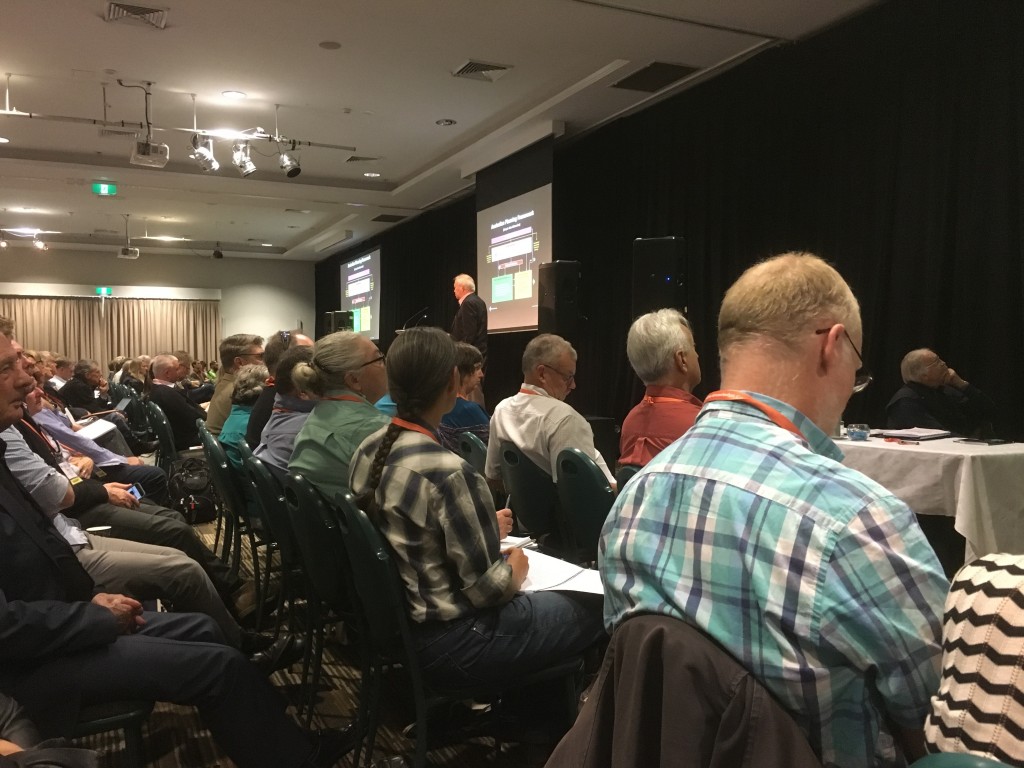 Darryl Low Chow in full flight at the conference

There were a lot of other highlights for me – a lot of which came from the strong Western Australian contingent at the conference.  Some of my “highlights” really were future focused, like:

Morgan also had a few favourites to add to this blog;

Piers has certainly listed many of the highlights, and for two-days, it was incredible how much excellent content could be crammed into a program. But additional to the talks listed above, there were a few interactions that really inspired:

There are so many ideas out of our copious notes (I think I took about 15-20 pages of scrawls and diagrams on my Surface) that it’s hard to pick just a few like these above to sum up the conference – so I won’t bother.  Instead, I’ll merely say that the conference was full of passionate people that have really energised* me to really make some positive difference to the NRM space.  So stay tuned for another followup blog about some specific parts of the conference from Morgan, and a few interesting projects coming up…

* I was energised leaving the conference – but a 5 hour drive from Coffs Harbour back to Brisbane followed by a delayed 5 hour flight home really left me totally shattered!