As part of the project I’m involved with in the Honey Bee Products Cooperative Research Centre (CRC) I recently delivered a short presentation on current research work at the Western Australian Herbarium.

The project aims to provide a detailed phenological (flowering) analysis of the native flora species used for the foraging of pollen and nectar by honey bees (Apis mellifera). However, the issues are these:

Table 1. Classification of ‘wandoo’, according to Nicolle (2019). Taxa in grey are no longer considered ‘current’.

The research question, therefore, was —
‘if apiarists continue to identify their bees foraging species by the broad concept of ‘wandoo’, yet they perceive differences in the tree (or the honey), then do these differences correlate to the modern taxonomic concepts?‘

To investigate, the best recourse was to rigorously score the flowering condition of all the well-identified voucher material in the WA Herbarium, of which there are thousands of specimens. The herbarium specimen label data has all been databased and geocoded where possible and one of the current generation of scientific curators – Malcolm French – had recently been through the collection and applied the most recent species concepts in the form of determinavit and confirmavit slips (Figure 1). 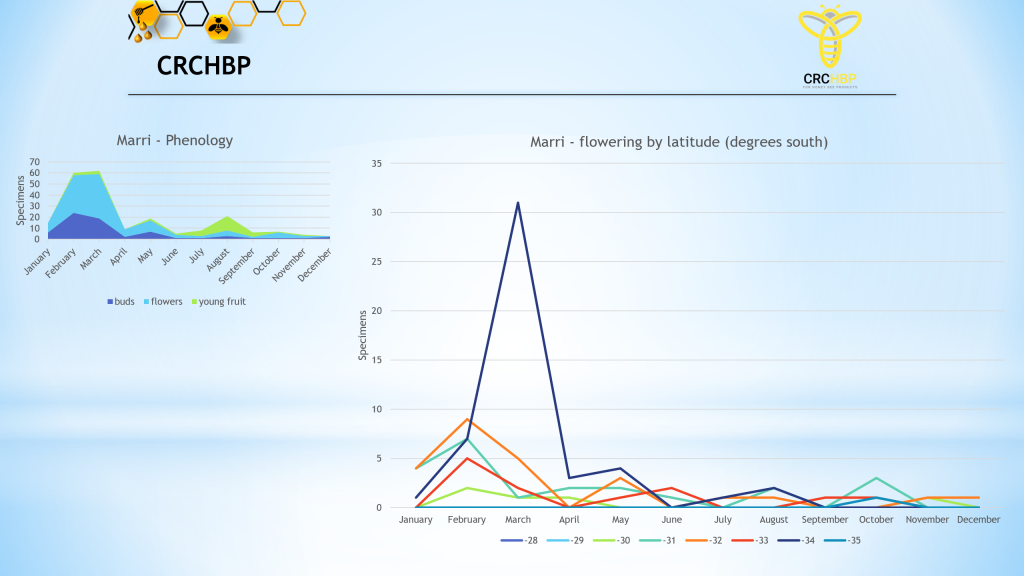 Further vouchered specimen data is being captured for additional native species on which honey bees forage. This will provide further verifiable evidence for flowering and fruiting times across these species ranges. With enough data it may be feasible to model the effects of future climate scenarios on the distribution of foraging species, as well.  Through this work I’ve been doing with the Honey Bee Products CRC team, and with the specimens in the Western Australian Herbarium, we’ve already started to add the data we need to answer the questions that the apiarists are posing.

Why not try out this prototype phenology tool that I’ve also prepared using the ‘wandoo’ data yourself? Then leave a comment below, start a chat with me via Facebook, Twitter or LinkedIn, or email me directly via alex.chapman@gaiaresources.com.au.