The Mount Kaputar Land Snail and Slug Threatened Ecological Community is an assemblage of at least twenty species of native land snails and one slug known from high elevation and dry rainforests of the Mount Kaputar region, in particular, the Giant Pink Slug (Triboniophorus aff. graeffei) a local endemic species and the most obvious and commonly seen member of this endangered ecological community. 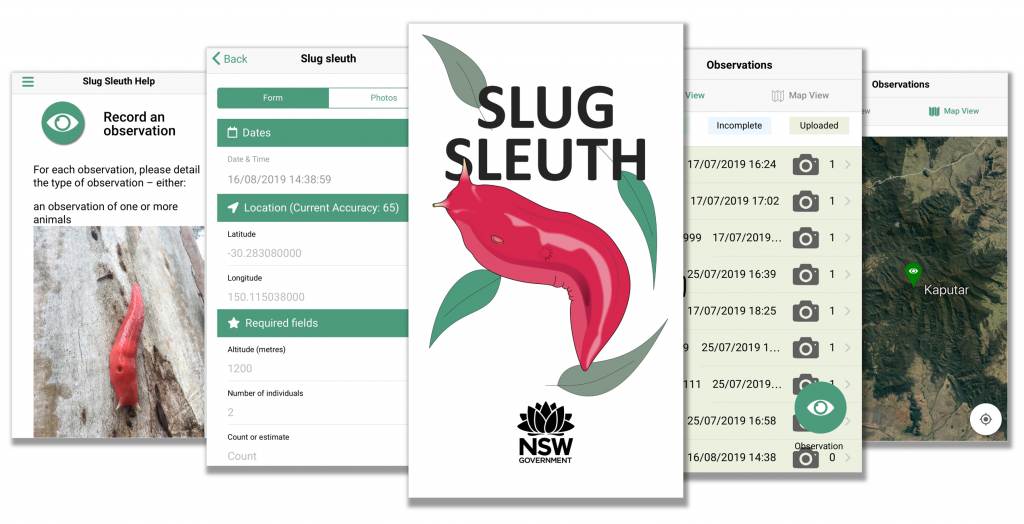 Screenshots from the Slug Sleuth app (beautiful work on the logo Tracey!)

In the first version, the Slug Sleuth app is designed to record sightings of the Giant Pink Slug within its known range. In future, the app will also allow users to record sightings of the two most commonly encountered snail species. Data collected using this app will help environmental managers, land managers and the community learn more about the distribution and habitat for this threatened ecological community, and assist the implementation of long term conservation strategies.

All data submitted via this app will ultimately be made available through BioNet, NSW’s corporate biodiversity data repository. BioNet data is accessible to researchers, land managers, government agencies and the public via the BioNet website and the SEED portal. The app is available for both Apple and Android devices.

Of special interest to Gaia Resources is that this app is developed to submit data to the NPWS BioSys repository. BioSys is an open-source, standards-based data management system built specifically for biological data. The system has a flexible data schema model that allows users to create a schema specific to the structure of their data, and that can apply to just about any sorts of biological and ecological data. It was initially developed in collaboration with Paul Gioia and DBCA biodiversity informatics staff.

Other apps developed on the BioSys platform and recently released include I Spy Koala.