Last week I presented to the Victorian Branch of the Australian Society of Archivists about the work that Gaia Resources does in the Archives industry (like these projects).  While I couldn’t stay for the whole workshop due to other meetings, I was able to stay for the morning session to help present, and to participate in a few discussions around digital archives, with a focus on smaller institutions.

Fraser Faithfull, Mike Jones and Ailie Smith did a great job of setting the scene for the morning, and what really got me thinking about where we are today in the digital archives space was the introductory session.  Each of the attendees introduced themselves and mentioned the systems that they were using – and there were plenty… 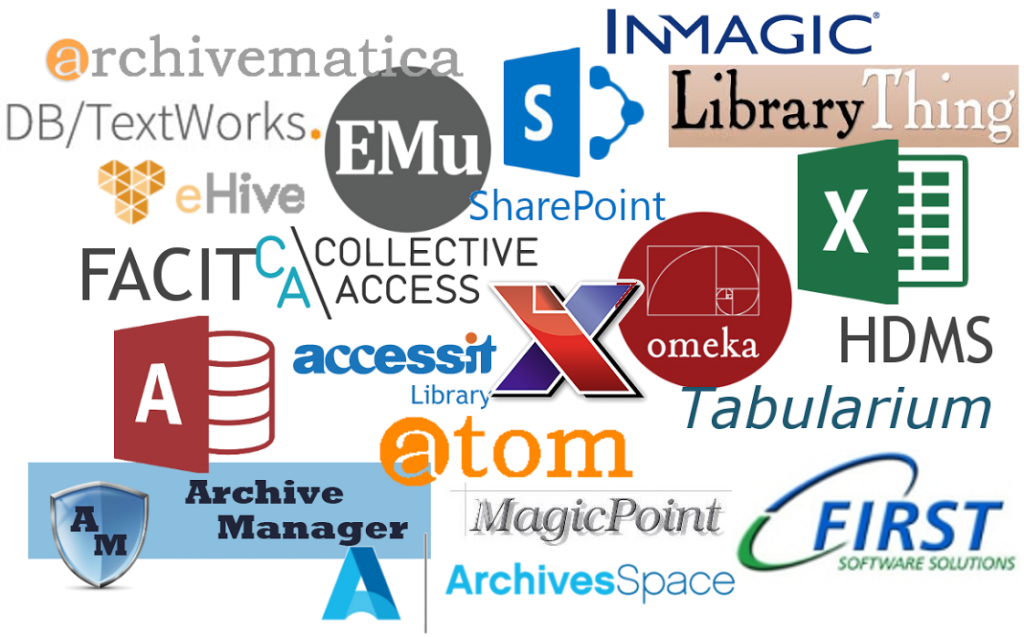 Logos of the systems mentioned during the introductions

The plethora of systems that are in use are something that we suspected, but to see it confirmed was a little bit daunting.  There’s a lot of complexity, a lot of investment and a lot of hope pinned on these systems.

I gave a bit of a messy presentation about our work with AtoM, Archivematica and a little CollectiveAccess, which I ended up jumping around in a bit based on where the audience wanted me to go – I’ve pulled out a selection of the most relevant slides I discussed in the copy of my presentation embedded below.

A revised version of the presentation I gave – just focusing on the areas I discussed.

A few things came up in my mind as we were talking through the presentations, and these can be split into observations about the technological side of Archives, and those about the Archives profession itself.

Firstly, there seems to be some sort of a progression of systems for organisations.  Starting with paper, groups seem to move to digital catalogues, using tools like Microsoft Excel, then to desktop based systems (e.g. HDMS) and then they start to look at larger systems to deal with scalability and getting Archives online.  Systems like AtoM, Archivematica and so on are at the more complex end of that progression; but they are also things that you need to consider.

When you think about Archives, you need to think about the timeframe.  Archives are “forever”.  This isn’t just a throwaway conceptual notion – this is literally what they aim for – that archives will always be there for the future.  Now, with my IT hat on, not very many IT systems are being designed to match, and most have a 5-10 year cycle before they reach their “end of life” and need to be replaced.

One of the ways that systems can be extended is through open sourcing them.  Systems like HDMS, which are currently closed source (of sorts) could be open sourced (e.g. under a licence like the Creative Commons Non-Commercial) and then, when anyone does work on it, everyone can get the benefits.  This also means that it’s not up to the one group to manage and maintain it, and this load can be spread around.

I’m certainly not qualified to comment on the Archival profession (I’ve still got “L” plates on my virtual cardigan), but there are some things that I was contemplating during the workshop. 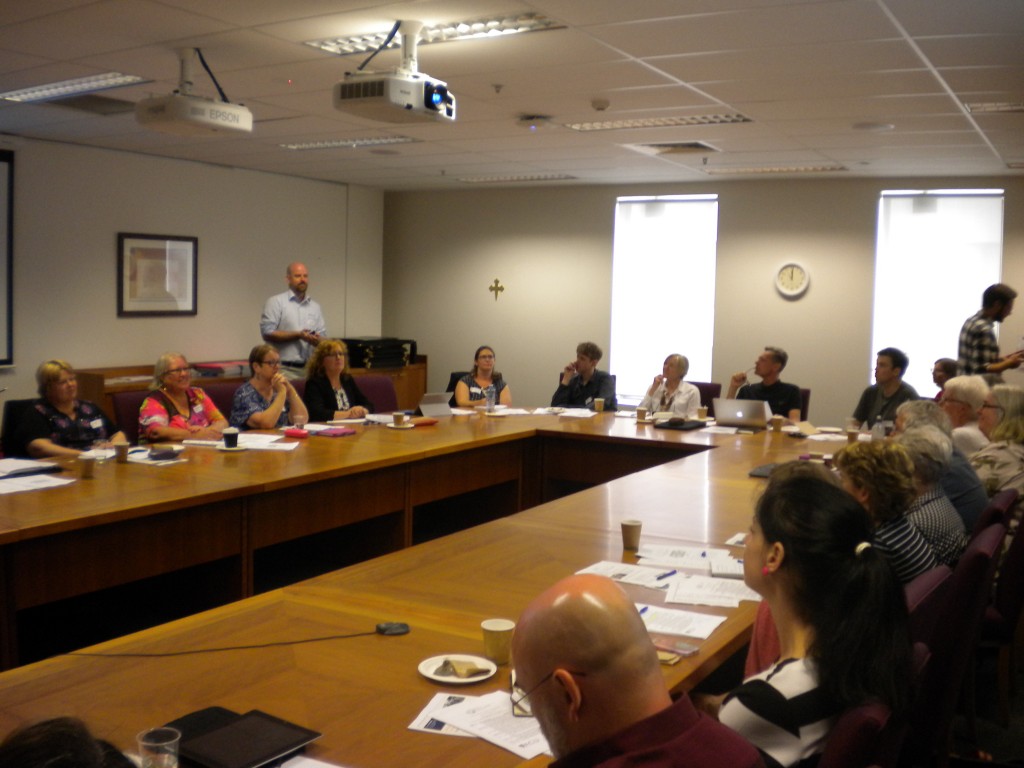 Presenting (sans cardigan) at the workshop

For some organisations, especially smaller ones, there are still quite a few basic steps to be solved before the technology should even be considered.  In my recent road mapping workshops (e.g. Geelong Heritage Centre, and the University of Melbourne) we started from scratch, and often the first question to ask is what data do they have and how do they want to manage it, and this means looking at standards, like ISAD(G) and the Australian Series System (there’s a nice document here by Chris Hurley on this).  Some of the attending organisations hadn’t heard of these standards before; this shows just how far the industry still needs to go to support the smaller archives and to make sure that they are able to benefit from the skills and learnings from others.

Secondly, the forthcoming digital tsunami (which might have already arrived) is something that there’s just a bit too much of a “head in the sand” approach for me not to say something.  With many archival records now being born digitally, the profession very quickly and enthusiastically needs to embrace this to make sure that this can be managed.  There were signs that this was happening at the ASA conference in Parramatta (my recap is here) – but I feel that talks like Tim Sherratt’s (his Twitter account is worth a follow!) might actually have been an outlier that is not representative of the broader profession, rather than a harbinger of things to come.

In my pessimistic moments, I can see that a “digital darkness” is going to be upon us. In a way, I have already experienced this myself by not being able to open my own historical files (e.g. I once typed up all my undergrad Uni lectures on an Apple Mac – yes, folks I once was firmly in the Apple camp, and that’s a story for another time).  But then I meet archivists like Mike, Ailie, Jarrod and others – younger folks who then say nonchalant things like “I am setting up my own Archivematica server at home to manage my photos”, and this brings a little ray of hope back to my day.

So, what does it all mean?

The million dollar question.  If you are a small Archive, then here’s some ideas.

That last statement might be a pronouncement I will look back on in the future and laugh at how wrong I was, but I fear that no one in the future will ever know, because this is a born digital blog – and there’s still a fair way to go before I’d feel sure that it will be preserved “forever”.  However, there is hope – and we’ll keep volunteering and working with groups like the ASA to try to help as well.