Tom and I are just back from the Surveying and Spatial Sciences Conference (SSSC) in Wellington, New Zealand. The 2011 SSSC (Twitter hashtag #sssc2011) was a fair way to travel – just over 10,000km, a couple of thousand dollars, 5 hours of time difference or just over 3 tonnes of CO2 for each of us. However you measure it, that was a significant investment, and as usual we try to wrap up our experiences here in our blog, and ruminate on if it was worth it.

No matter how you count the cost, we were always going to be there in some form. Tom has been very active in the Surveying and Spatial Sciences Institute national and regional committees and in helping bring, learn and run the GIS Programme Management course in Australia. For myself, there were two drawcards – the nomination I received for the Asia Pacific Spatial Excellence Award for Spatial Professional of the Year (won by Tony Bitz, congratulations!), and also the curiosity I have with what the SSSI is doing. Although, I would have to say, it’s a bit sad I had to travel that many tonnes of CO2 away to find out the latter.

I also made the most of this trip to go and talk to the Ministry of Agriculture and Food about their issues with Kauri dieback, which in a sense is similar to the work we did with South Coast NRM on dieback here in Western Australia.

So, what were the things we came away with as highlights?

There are a bunch of other things that we really liked, like the powhiri at the start and the generally high level of integration of Maori cultures in the conference.  That, and the enjoyable time we had a Te Papa (both for the dinner, and when I went of my own volition), and a fabulous dinner at the Ambeli.  Wellington is a very scenic place, too…

And one thing we have to mention here is how social media worked in practice, in particular, Twitter. Take a look at these figures from the last 500 tweets from the SSSC (grabbed from http://archivist.visitmix.com/28ea2dfb/2/User): 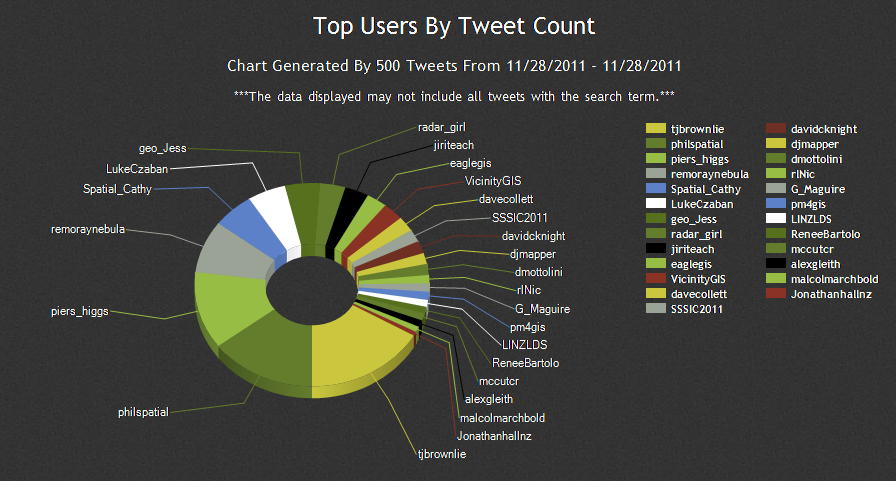 Tom and I alone provided around 30% of the Tweets from this conference, but we had engagement from people well outside of the conference. We also used it to get some good feedback on presentations, projects, and even the next SSSC from using it.  If you don’t have some presence in social media, then you are seriously missing out on some great stuff, that could be very useful for your business, assignment, career, or just that next project.

Was it worth it?

To be honest, yes, this conference was worth attending.  It was a great event in terms of the plenaries, the topics being discussed and the people that we met there.  It really gave us a range of things to think about for the future of Gaia Resources.

As a result of the conference, I also got to think about a couple of issues that I believe we really do need to start doing something about as an industry. This next bit is probably going to ruffle some feathers… but I think we’re grown up enough to take this as a bit of good-natured criticism with a few possible solutions thrown in.

The ongoing issue of the identity of the “spatial industry” came up yet again and, yes, there was more navel gazing going on – but maybe, just maybe, this time we have a start of a solution. The whole “industry” struggles to explain itself to our wives, husbands, children, grandparents, clients, colleagues, friends and even to that weird uncle everyone has.   I do like Renee Bartolo’s suggestion, “We are the Science of Where”, but I personally like “We are the Custodians of Where”, implying we’re looking after it for the next generation, and the public, and others.

Tom and I share the similar opinions to those he put forward in his “GIS is Dead” presentation he did recently at Georabble, (which we will get him to record soon and put up on Youtube). “Spatial” is becoming commoditised, and that brings many risks and opportunities, as Andy Coote told us in his plenary session and in the workshop he ran (which Tom also attended). Put together calls to action from Mike Goodchild, Manfred Ehlers and Renee with opportunities presented by Andy Coote and, yes, even from Google, and we could really get this issue just sorted – and we need to start doing something.

I have another metaphor I roll out regularly, that compares the spatial industry to the typing pools that used to exist in the 1960s and 1970s. While this metaphor doesn’t really hold up under scrutiny, it makes you think – where are the typing pools today? They don’t exist because everyone is expected to be able to type (but, without training, you see people typing with two fingers), and everyone has word processing software. That’s the barrel of the gun we are looking down as an industry. Google Maps might just be the equivalent of Microsoft Word, and we might be the last few people stuck in the outdated typing pool… food for thought, anyway.

I tend to be more in Mike Goodchild’s camp (especially as a Geographer myself, among my other hats). We have a place in understanding and explaining the science, and in doing the “hard stuff”. I don’t think I mind not making quite so many maps these days, and I love using spatial technologies to solve people’s problems. We should be the ones leading this field, explaining the science, and being able to help solve problems.

Looking forward – i.e. let’s do something!

The ramifications for this “typing pool effect” are huge across our industry, and especially in our future leaders, including our SSSI Young Professionals. If this is a major change coming through our industry, you can imagine what this means for education of our future leaders.  As well as education, I think we need to see more innovation in the industry, so these two points are things that I think we should take forward and do something about, quickly.

Our future leaders need to be taught the “Science of Where”, but they also need to be taught to think outside of our traditional boxes, i.e. that “spatial is not special”, and other people are doing it better than us. And they need to be taught the new and appropriate tools to prepare them for this new environment.  So, universities, TAFEs, colleges, training groups, and everyone who teaches – keep up.  If you are a student, demand to be taught the cutting edge spatial technologies, learn about open source, and mashup data using Google Maps for your assignments.

For those of us who are already in the industry, it’s time we took our head out of our traditional boxes not just to look at the opportunities, but also so that we can help educate the next generation. We need to continue to work with younger professionals to help them. I was quite happy to see the President himself have a go at employers for not doing enough, but I also think that that should be backed by some action from SSSI.

At Gaia Resources, we have run a scholarship for 5 years to attract more first year students to the Spatial Sciences program at Curtin University. We hire students to work as paid casual staff, and I think we pay them well – so that they can see there is a future in their studies.  We refuse to hire them more than casually until they graduate, so they finish what they started and learn the “science” properly and holistically. We run professional development for all our staff, guiding them on how to choose their projects, and paying for them to go on courses and learn new things.

Those of us in the industry also desperately need to innovate, because if we don’t, then we’re definately going to be retiring early.  Innovation rarely happens within our industry – it usually comes from outside.  A few people have noticed the amount of innovation we’re putting out of Gaia Resources lately (Emergentweet, public transport mashups, using game rigs for serious aerial photography, and more to come), and that’s intentional. Although we haven’t commercialised these innovations – yet – it gives us good grounding in being innovative, and is building a culture of it. The more you do, the better you can do it. We have a bunch of new innovative projects planned in the near future, and I am strongly pushing for more.  The SSSC 2011 was a good way of starting to think outside the box, but we need more like that (bring on GeoNext!).

Despite the inflammatory rhetoric, I do think that there are many opportunities that this change will bring to our industry, if we’re ready to square up, seize them, and get things done.

We’ve already lost (or given away) control of our own destiny in the spatial industry. It’s time to take it back.