This week we went to the WA Surveying and Spatial Sciences Information (SSSI) Conference. This is an annual conference that is run for the SSSI, and this year was a two day event – Thursday was more focused on spatial science, and Friday more focused on surveying.  Akeal, Mel and I just went to the Thursday program, but Tom and Andrew hung about for Friday as well.

I presented about our work with ClimateWatch, the Atlas of Living Australia, and citizen science in general, on Thursday.  The presentation I did is available below; just click on the image to get a PDF of the slides. 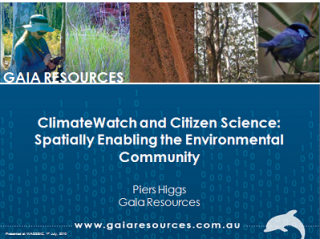 I think these were recorded during the event – if they are made public I will make sure to add in a link to them as a comment to this post.

On Friday night we also all went along (with AJ) to the WA Spatial Excellence Awards. This is the industry event for the spatial sciences in WA, and we nominated two projects we’ve worked on this year, ClimateWatch and SWAEI.

What was great to see was that Charlotte Plug, who has worked with us for a few years and is the first recipient of the Gaia Resources Entrance Scholarship, took out the prize for the best undergraduate student – and she definately deserves it!  Charlotte has been doing a lot of work with the GIS in Schools groups, and has been around at a lot of award ceremonies!

If you follow us on Twitter (e.g. me, AJ or our corporate account), you will have already seen that we also won an award!  Our work with the ClimateWatch project, where we developed the underlying Biological Data Recording System, took out the Environment and Sustainability category. I didn’t get to thank anyone for this award at the time, so I’ll do it here: this work has been a long project, and much of the praise needs to go to Tim Carpenter, who did a lot of the development work, and AJ, who took over it from Tim.  And of course, to the Earthwatch team of Andy, Rachel, Peter and Rich, and the Atlas of Living Australia, who funded it.   There’s also some pictures of me receiving that award (better than the one AJ tweeted!) coming at some stage.

The upshot of winning is that our project is now also going to be entered into the Asia-Pacific Spatial Excellence Awards, to be presented at the second spatial@gov conference, in Canberra in October.  So looks like I’ll be continuing my shuttle run across to Canberra – I have to be there in late September to present at the Australian Association for Environmental Education conference as well!  Sorry, TDWG folks, I’m not coming to Woods Hole.

For me, this was a big deal.  This is the first award that Gaia Resources has won, and hopefully it won’t be the last.  To me it means we are on the right path – but I really want to keep pushing us to do better, so don’t expect us to rest on our laurels!