For the past few months we have been collaborating with the Western Australian Marine Science Institution (WAMSI) to build a metadata portal for WA marine metadata called IGEM (Industry-Government Environmental Meta-database).

The aim of IGEM is to promote and understand what marine studies have been completed; by whom and when. Its long-term goal is to avoid overlap in data collection and facilitate the sharing of datasets and knowledge among industry and government for the benefit of all marine users and long-term management of Australia’s marine estate.

The portal provides the ability for industry partners to add their own metadata records either via the upload of an existing XML file or by creating a metadata record using the form within IGEM. All uploaded records are then reviewed by a Curator before being released live to the site. Users can then view any available metadata records and search the records via a number of filters including; spatial, temporal, title and organisation.

Records can also be exported to a report to assist with users own report writing or for use during emergency response. 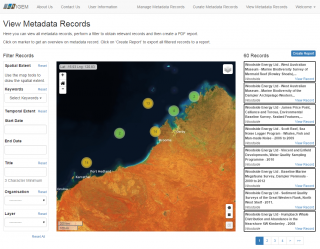 Existing metadata records are currently being added to the site in preparation for an expected release date in early February.