What is topology in a geographic information system?

In spatial technology, the word “topology” is all about the building blocks of geometry. Like other ‘ology’ words (e.g. geology and biology) it has its root in the study of something – and in this case we are talking about the study of geometrical properties and spatial relationships between constituent parts of a shape or a set of related shapes. Topology considers anything from the individual feature to the relationship between features. Individual features can be in the form of points, lines or polygons. Furthermore a polygon can be broken down into its constituent nodes/vertices, segments/edges and faces (see schematic below). Topology usually deals with the way in which features interact with adjacent or connecting features.

The job of maintaining topologically consistent data is critical if you are in the business of using spatial data to do anything beyond make basic maps; for example, accurately calculating area of different vegetation types in a study area.  Encompassing this process is a huge range of software, tools, and features that enable users to maintain a healthy dataset or database – and we’ve been dedicated enough to go through these for you. Scroll down to find out how you can get a handle on your funky topology.

In your GIS travels you may come across a number of topology errors, each with their own whirlwind of disaster! Sometimes the topology issue is not easy to spot until you try and run a geoprocessing tool and it just falls over with a generic error message. The problem is often so small and at such a minute scale, that you wouldn’t know it is a problem until you get these errors trying to work with the geometry. 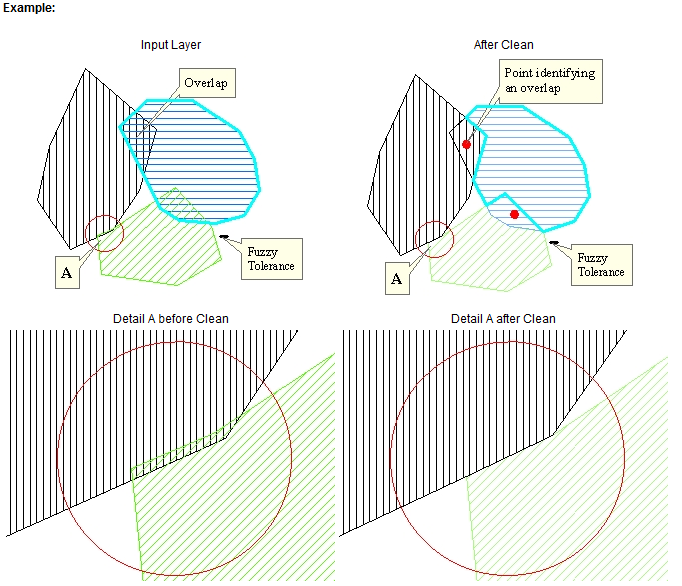 Some of the common topology errors include:

Depending on the purpose of your data, there are several other error types you can look for with the topology software and tools available.

If you encounter any of these it is probably safe to say any further analysis on the data will create more problems, and you need to get that stuff fixed up!

QGIS (a free and open source GIS package) has a topology checker tool built into its core product. Users are able to set specific rules which will point to that error’s location and allow you to focus on it and fix it. This can be more of a manual task of fixing one error at a time from the list generated, but very helpful nevertheless considering that some of these errors could be tiny.  I had the pleasure of working on one native wildlife habitat project with over 25,000 errors in one dataset, and I should point out there are ways of streamlining these tools to efficiently deal errors of that scale. 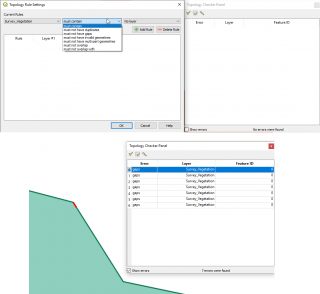 Example of the topology checker tool in QGIS

Check out our QGIS video tutorials where we go through this tool and others. There are also new tools in version 3.x to ensure topology is digitised correctly and errors are kept to a minimum.

The added bonus with QGIS is the multiple GIS software packages and plug-ins that extend the core product. This opens up other avenues in order to investigate topology tools for your particular purpose.  In particular, check out GRASS “v.clean” in the QGIS processing toolbox!

ArcGIS is a leading proprietary GIS desktop software and has multiple tools for establishing topology rules, as well as checking and fixing errors. Using topology features in ArcGIS requires an  upgrade to the middle tier license – called Standard – that comes at an additional price to the Basic product.

There are excellent topology tools and workflows that can be used to setup new data or import existing data – embedding specific topological rules (i.e. no gaps, no overlaps, etc.) so by the end of your project you will be the proud owner of topologically correct data.

Other commercial software out there also deals with topology issues in a range of other ways.

ET GeoWizards is an extension tool for ArcGIS as well as having its own standalone software product. It has a once-off cost – a relatively small investment for something that we consider to be good value for money. This link will give you an overview of what ET GeoWizards offers in terms of topology and how it goes about identifying, maintaining, and fixing topology errors.

For the functionality and quality of output that ET GeoWizards offers to ArcGIS Basic users out there the relatively low price point is justified in our opinion.

PostGIS is a free and open source spatial database software that includes a small number of topology tools. It’s a bit more complex than the ‘usual’ desktop tools, but it’s worth reviewing for larger corporate systems.  Check them out here!

So, you’ve come to the realisation that you have a (topology) problem. Great! You’ve accepted the challenge and your data is on the road to recovery; so, which toolset is best for you? Well, there’s a bunch of different ways in which these software packages can be used on their own or in combination to deal with different topology issues; as shown below: 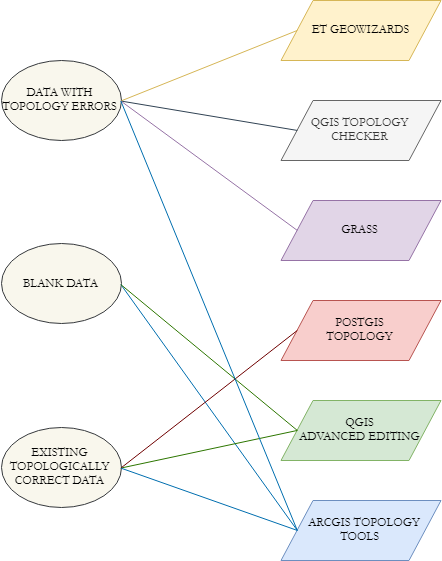 Matching topology needs and software in a “simple” diagram

We have come across multiple instances where datasets needed some topology love (click here for project examples). Depending on the use case the software chosen usually stood up to the task and in some workflows the process could be automated.  In our disturbance mapping work for various mining companies for instance, their tenements, disturbance and various other datasets were overlapping and convoluted in ways that made it impossible for them to get an accurate a reliable snapshot and statistics for environmental reporting.  With a mixture of ET GeoWizards, QGIS, and automated processes we were able to cleanse their data and output a result for the client to report efficiently and effectively.  We also documented the on-going processing that was needed for their team to continue to maintain a topologically clean data store into the future. This is something that we’re working up right now into a separate blog article, focusing on the entire chain from capturing disturbance through to processing results, from start to finish.

If you would like to know more about this subject or how we can help your business understand, cope, or survive topology in GIS, then please drop me a line, or start a conversation on Facebook, Twitter or LinkedIn.