Yesterday I attended an online event discussing planning for resilient World Heritage Areas, focussing on case studies in the Gondwanan rainforests of NE NSW and SE Queensland. The event was part of the Climate Change, Fire, and Biodiversity webinar series, co-hosted by the NESP Threatened Species Recovery and Earth Systems and Climate Change Hubs.

Twenty World Heritage Areas are recognised in Australia by UNESCO for their unique cultural, geographical, and biological diversity. While these areas support outstanding universal values, they are under risk from disease, invasive species, and declining ecosystem processes. The speakers and panellists, drawn from the scientific community and on-the-ground conservation practitioners, discussed the benefits and challenges of integrating climate change and biodiversity knowledge in developing adaptive management plans to build more resilience in both species and ecosystems. They also clearly identified that existing ecological pressures are being exacerbated by a rapidly changing climate.

There were two featured speakers and five panellists discussing these pressing conservation issues – you can read more about each of them here.

Melinda Laidlaw, a Senior Ecologist with the Queensland Herbarium, gave a fascinating talk on a number of the decision tools employed for modelling past, current and future species habitats and investigating the impacts of climate change on the Gondwana Rainforests of Australia World Heritage Area.

Dave Newell, a Senior Lecturer at Southern Cross University, spoke passionately about his work on understanding the ecology of endangered amphibians, most of which are narrow range endemics susceptible to climate change and disease impacts. Dave and his students’ work in the World Heritage rainforests of northern NSW over several decades has improved conservation outcomes for some of Australia’s most unique frogs. 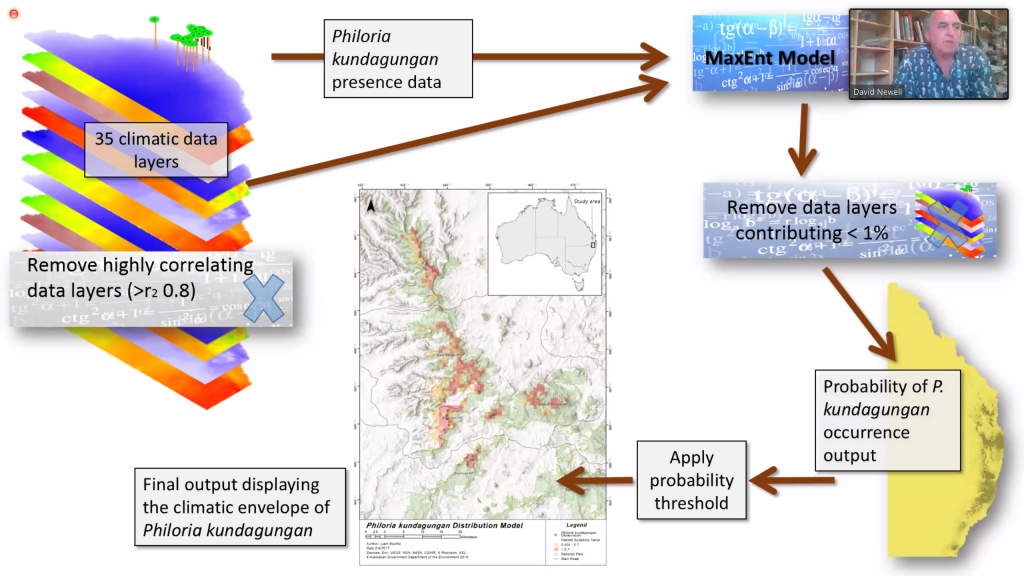 In response to audience questions, the panellists also discussed other threatening processes like extreme bushfire events and invasive diseases such as Myrtle Rust, the importance of new research into understanding the importance of ‘cloud water’ as a key survival strategy for some montane species, and the necessity of on-the-ground community coordination of conservation efforts.

I will add a link to the full webinar recording when it becomes available, or you will find it here in coming days.

The next webinar in this series is ‘Carbon sequestration & biodiversity: valuing & managing carbon-rich systems‘, scheduled for Tue, 13 October 2020 – I commend this series to you.

Species habitat modelling is an area I’ve long been interested in (I was a fairly early user of BIOCLIM in my work at the Royal Botanic Gardens Sydney, too many years ago) and more recently wrote on the utility of using the Biodiversity and Climate Change Virtual Laboratory (BCCVL).

Gaia Resources has worked with another NESP Hub – Clean Air Urban Landscapes – in recent years to build their Urban Wildlife mobile app. If you’d like to know more about how Gaia Resources could work with you in this area, then please drop me a line at alex.chapman@gaiaresources.com.au, or connect with us on Twitter, LinkedIn or Facebook.