We’ve been lucky enough to work with a lot of award winning projects over the years, and there has been a couple more recently!

First up was our work on Retromaps, which recently won the Spatial Enablement category of the Asia Pacific Spatial Excellence Awards for Western Australia. 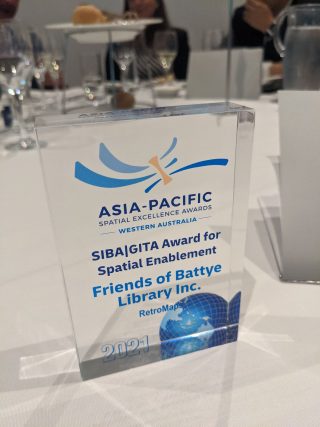 This project started a very long time ago when we started thinking about what to do with maps in Archives around Australia.  We had been working with the State Records Office of Western Australia (SROWA) on implementing a new Archival Management System for their use (based on the open source Access To Memory platform), and so we picked up some publicly available maps and in December 2015, we georeferenced a few, and did a basic web map (located here).  Then, in 2016, Damien Hassan from SROWA came to one of our QGIS training courses, and we talked about how to digitise those maps (again, here).  Damien worked on the digitisation of those 2,202 plans over the course of the next few years, and Retromaps was born from that massive effort.  Next thing I know, Damian Shepherd and I are standing in front of a room full of spatial people accepting an award for the project on behalf of our teams that worked so hard on this project.

About a week later, we were invited by the team at South Coast NRM to watch the 2021 Australian BioSecurity Awards, where there was particular mention of the Project Dieback project – which we have assisted with the development of the Dieback Information Delivery and Management System (DIDMS), which was again contributed to by a large group of people over the years.  Their acceptance speech was a good one to see:

There’s nothing better than hearing that our clients have won awards for work that we’ve done with them, as it really does make us feel like we’ve done a good job.  Some, like Retromaps, end up being years in the making, but that’s still a great reminder of what we’ve delivered.

Really – what we want to say is “thank you” to our clients for choosing us to work with them, and hopefully we can help our future clients win more awards!

If you would like to know more about how Gaia Resources can help you, then feel free to get in touch via email, or start a conversation with us on Facebook, Twitter or LinkedIn.

P.S. For those not in Australia – the title “Straight to the pool room” is a great line from an Australian film called “The Castle”, meaning that it’s worthy of being treasured!