We posted a teaser picture yesterday on our Gaia Resources Facebook account of some of the testing that we are doing on a new upcoming citizen science mobile app:

Over the years, we’ve done heaps of testing on our own mobile apps… and it’s quite fun to go back to our earlier days and have a look at the sorts of things that we’ve blogged about like these:

Yesterday was the continuation of our tradition to get out into the environment (even if this one was just the carpark) and test our own mobile apps, especially the citizen science ones.  This particular app has a number of different themes in it, and one of which was around insects.  It was actually quite hilarious to have us all looking at this tree pictured above, seeing bees, a few flies and so on… then Tracey spots this beast after about three minutes of us all staring at the tree: 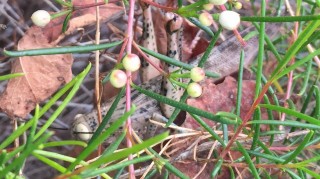 Now that is a grasshopper (or rather, a locust?) – about 7cm long!

Testing is something that I really enjoy doing personally (thank my OCD for that) and we get a lot out of an intensive hour long session like this, where we can try using the app with fresh eyes after so many weeks of working on the indivudual screens and individual components.  And, like I ended up posting on my own Facebook account – at least I get away from my desk for an hour!

If you’d like to know more about how we can help you with citizen science projects, get in touch with either Alex or myself in our Perth office on (08) 92277309, or start a conversation with us via via Facebook, Twitter or LinkedIn.